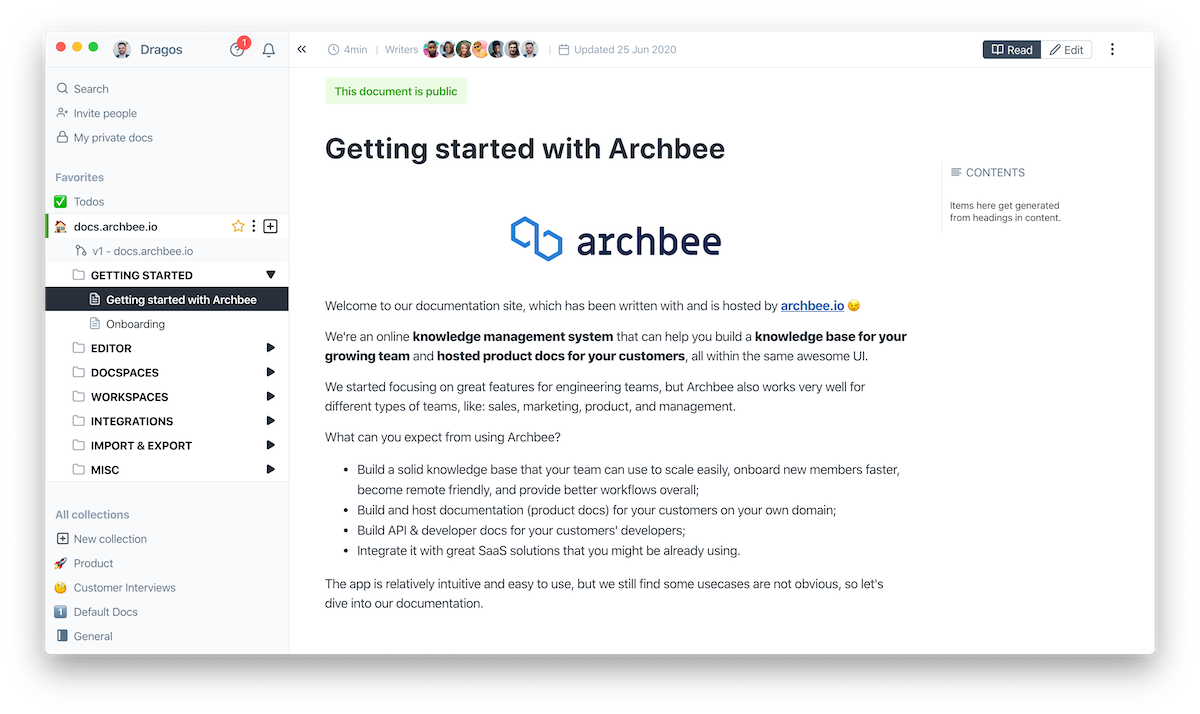 Our largest UI change to date is here!

Here are the details:

The three-column layout was problematic:

So we decided to combine the first 2 columns into 1, and pick different colors.

UI Improvements across the app

We made a huge number of small adjustments to colors, spacings, and the blocks are more tightly integrated. The cleanest design in Archbee to this date!

Of course, we couldn't resist and improve more than 20 interactions, as UX is the most important an app like ours can offer :)

The concept of docspaces (document organization) was also alien to most people, and it was easy to confuse it with workspaces (company/people organization), so we decided to rename it to "Collections".

Lastly, we introduced the concept of Favorite Collections, as most people only interacted with 3-4 docspaces and they had to scroll and visually search for what they needed. Even if you could drag and drop to organize them to your needs, the overload was still there.

What are we working on next? (subject to change)

Get in there, play with it and let us know in the chatbox how you feel about this important change in the app!

We moved our website to new technology, so now our app now lives at https://app.archbee.io

All existing links will automatically redirect to the new URL.

This is a breaking change for the native apps, which will not work until you upgrade to the latest version (should be automatic, prompting you to reload the app to apply the new version).

We don't predict any downtime, but if there is, please go use the new https://app.archbee.io for the app which should work without any change after logging in.

In the beginning of the year, we had an idea that realtime chat on documents would be a big deal. We launched it, but it didn't take off. We couldn't get users to actually use it.

Many users and customers told us they were missing traditional comments. We got proven wrong, so we built inline comments!

How to use? Select any text and add a comment. 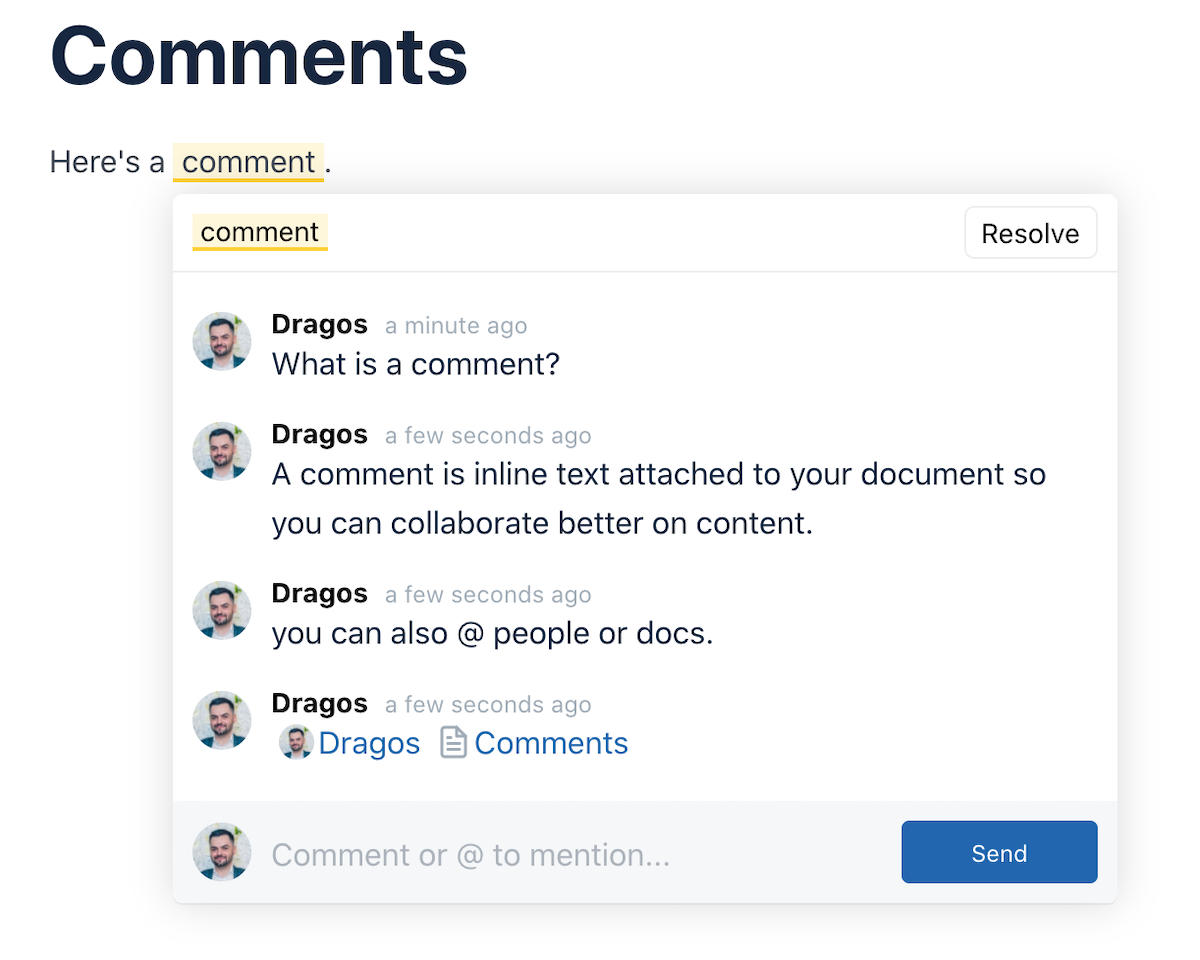 We're keeping focus on our core technology, and a UX redesign is coming for the left side of the app. Stay tuned!

You can now set emojis as docspace icons.

You can also set emojis as docs icons.

Or shortcuts in the editor also convert. 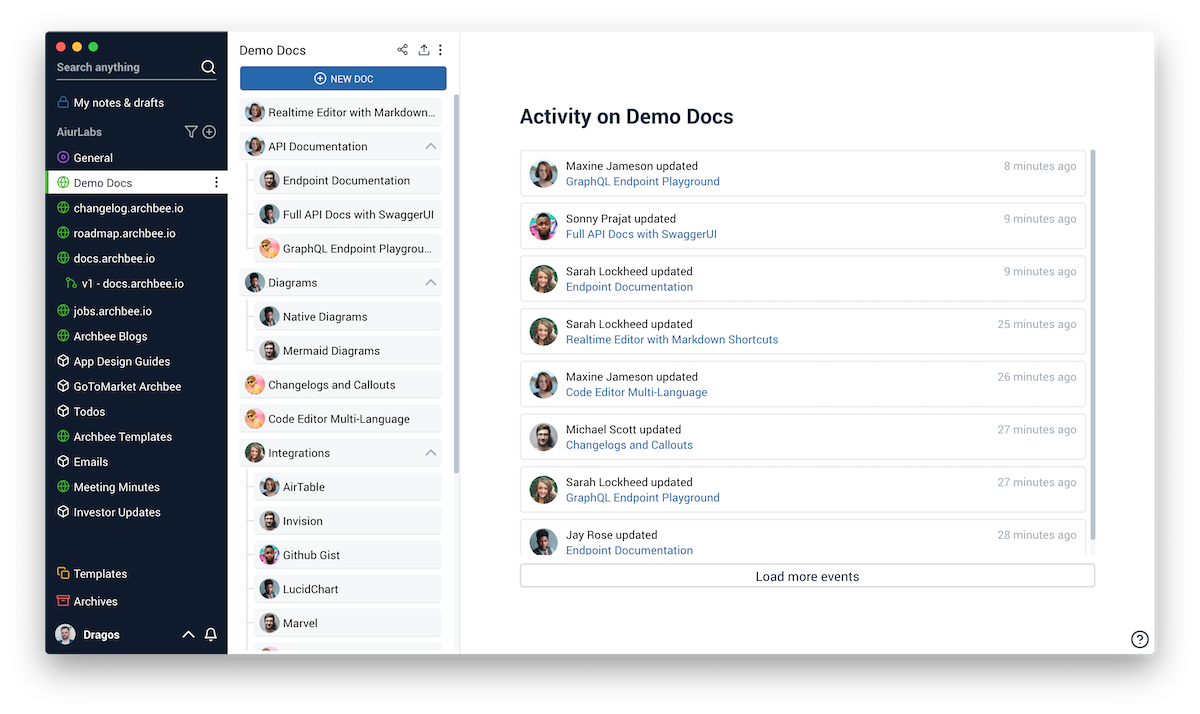 They're fast and are tuned out to not eat any more memory than the regular in-browser app.

They get you notifications right in front:

Try it out, we're confident we deserve a spot in your taskbar :)

As always, keep the feedback coming!

We've heard the feedback, table of contents needed much improvement, both on the internal side but also for external docs or docspaces.

We've built a better UI for all of it, starting from the editing experience, ending with your customer's docs delight.

Here's how it looks like on the internal side.

And the external shared side.

The same improved TOCs are available on individually shared docs and our blog, which is powered by Archbee's editor, check it out:

This is why we now have native support for Mermaid, a markdown flavored syntax for building diagrams.

Here's a short gif showing you how it's done.

You can find the full documentation of Mermaid, the markdown flavored syntax here: https://mermaid-js.github.io/mermaid/#/

Our doctrees allow you to build any hierarchy you might want.

But sometimes you want to have parent docs without needing to write anything inside. No more "In here is this, this and that."

This is why we built doc categories. Here's how they look: 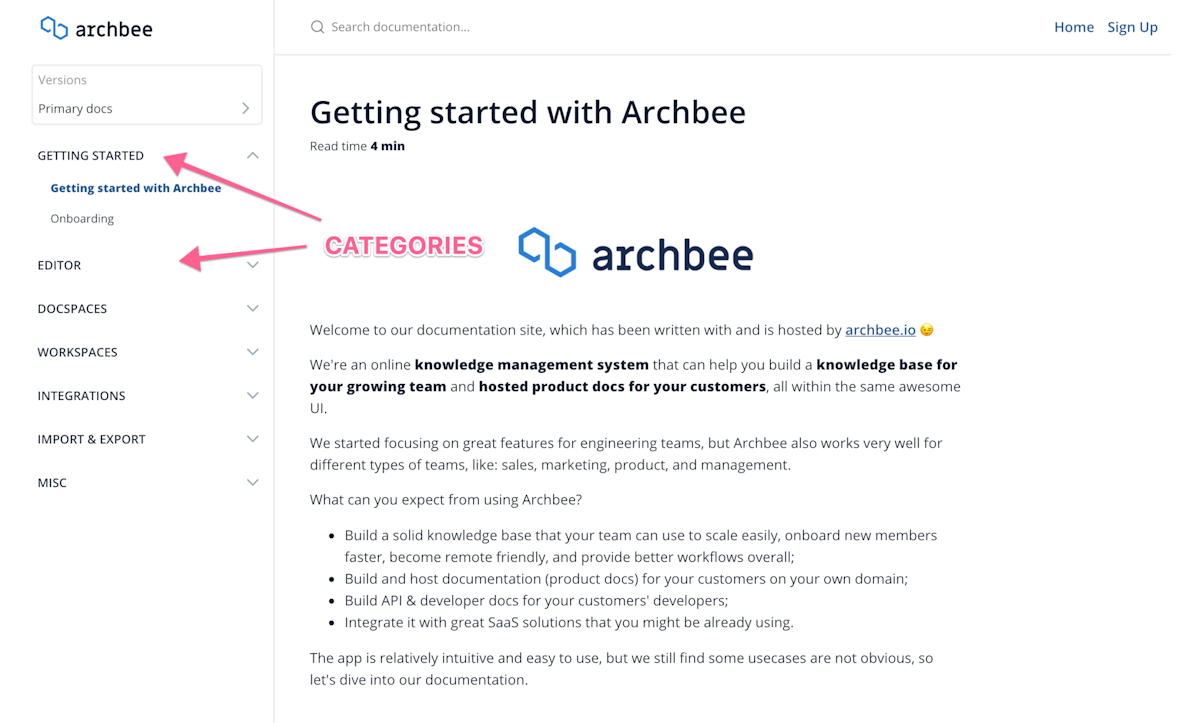 Now you're set to go kill the docs game!

We've heard you, the rendering on the public view of docspaces needed improvements.

A refreshed UI is now available, along with performance improvements and placeholders for loading states. The search function used to be a bit hidden, now it's front right and center.

We've also made it possible for you to set the favicon to make your branding experience complete.

Now go in there and build the best documentation for your team and customers!

For customers on the Scaling plan, this is now available. But we do hope you will help us become more popular by keeping the branding on 😇.

In the process, we've also made doc loading 5% faster, for both internal docs and external docs.

For hosted public docspaces, we've added a status indicator that now allows you to see if your DNS has propagated or not, and more information for how to check yourself if you need details.

Create yours, for free!